Article about Russian Demantoid by Tsarina Jewels founders in InColor magazine by International Colored Gemstone Association. Find out more about this enchanting gem from Russia in this article below: http://gemstone.org/incolor/Incolor36/40/

As early as 1819-21, attention was being paid to a green gem discovered in a gold-platinum placer of the Bobrovka River near the village of Elizavetinskoe, located 40 km southwest of the city of Nizhny Tagil in the Ural Mountains of Russia. Incorrectly identified as peridot, it was later determined to be a new mineral. Because of its high refractive index and dispersive powers, it was given the name “demantoid,” meaning “diamond-like.”

When visiting Russia in 1856, the respected Finnish mineralogist, Nils von Nordensheld studied the mineralogical properties of the new green gems from the Urals. He determined that they were, in fact, not peridot but a new mineral. In February 1864, he spoke to the St. Petersburg Mineralogical Society pronouncing this new discovery to be an andradite variety of garnet.

Later, in 1884, A. V. Kalugin and his son found demantoid in the gold-bearing sands of the Bobrovka River, near the village of Poldnevaya in the Polevskoy district. They did not know about Nordenscheld and his determination, and decided that the green gem was chrysolite (peridot). Under this name, Poldnevaya demantoid remained for a long time classified as “chrysolite” in the jewelry business.

Mining engineer A. A. Lesh determined the chemical composition of the Poldnevaya “chrysolite” to be calcareous iron garnet. He announced his discovery in 1887 at a meeting of the Imperial St. Petersburg Mineralogical Society [1]. The same definition of the chemical composition for the demantoid gems from the Bobrovka River near Elizavetinskoye was made by Professor P. Nikolaev in 1881 [1]. By an incredible coincidence, the first two deposits of demantoid were discovered in the gold-bearing sands of two completely different rivers under the same name of Bobrovka, which is separated by more than 200 km (Figure 1). Therefore, when mentioning the deposits of demantoid, nearly always two names are specified: Poldnevaya Bobrovka or Nizhny Tagil (or Elizavetinskoye).

In 1887, demantoid was presented at the Ural Industrial Exhibition as a new gemstone. Following the event, exports of the gems increased, and so did the prices, which grew rapidly. After the Paris Exhibition in 1898, prices for demantoid reached their highest level yet [2]. This led to sharply increased mining for the gem, reaching its maximum production in 1913 of 104 kg.

From 1875 to 1920, demantoid was very popular both in Russia and abroad. It was during this time that the green gem was used in jewelry and objets d’art by the famous Peter Carl Fabergé (Figure 2). 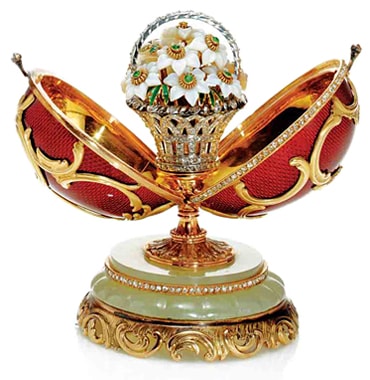 Figure 2. An Imperial Fabergé egg Spring Flowers from 1899, on display at the Fabergé Museum in Saint Petersburg. (Photo: Fabergé Museum) 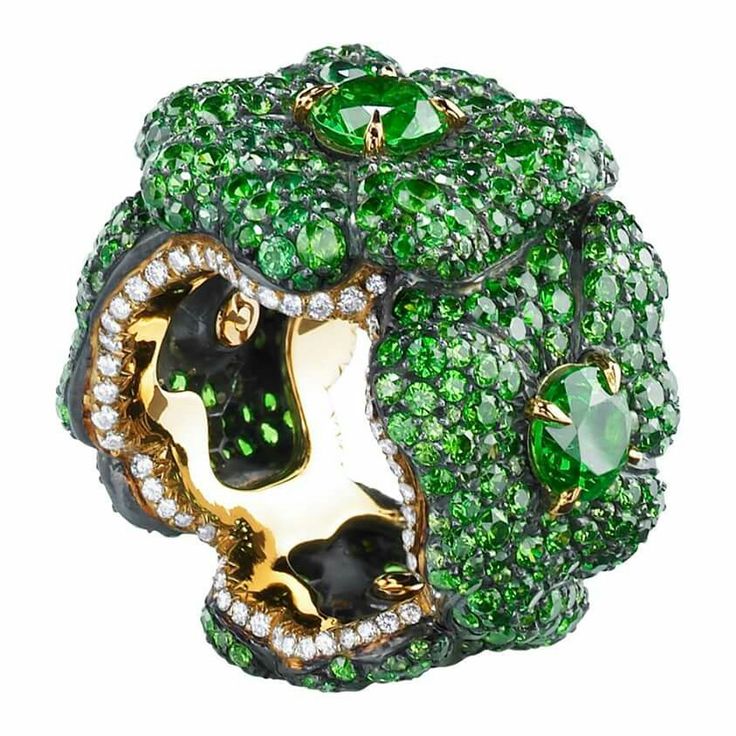 Starting in 1920 and continuing up to the late 1980s, demantoid fell into relative oblivion. For the geologists of the “Uralkvartssamotsvety” association (Department of the Ministry of Geology of the USSR), it seemed to cease to exist. Nevertheless, the gem maintained quite a bit of interest for collectors, aficionados, gemologists and scientists.

The most significant work at this time was done by A. N. Aleksandrov. He first studied the impurities in demantoid and established that the green color was due to the chromium content. Aleksandrov also made the most complete description of the Ural demantoid.

In the late 1980s, there was renewed interest in the green gems and the opportunity to conduct geological explorations. That resulted in the discovery of a new primary deposit at Korkodin, located just 7 km south of the Poldnevaya deposit.

Because of the geological surveys and prospecting in the Urals, many new deposits of demantoid were found, beginning with the Polar Urals (the Hadota River, the Syum-Kehu Massif), the Sub- polar Urals (the “Svetlana” manifestation in the Khulga River basin and placers in the Sertyni River) and the Southern Urals (a number were found near the cities of Verkhny Ufaley and others).

These deposits have not, however, been sufficiently studied and explored to determine if the extraction of demantoid is economically feasible. Currently, geological exploration and mining are occurring only at two deposits: Korkodin and Poldnevaya.

From the end of the 19th century to the early 20th century, demantoid deposits were known at locations several kilometers south of the upper reaches of the Bobrovka River [13]. In 1991, as a result of prospecting within the Korkodinsky massif at the Uralkvart samotsvety, a primary deposit was discovered 2 km northeast of the railway station at Korkodin [9].

The deposit currently belongs to Gran Ltd and is being actively mined. We can only estimate the share of Gran Ltd in the production of faceted Ural demantoids. According to some experts and dealers, it is about 75% of the total.

The Poldnevaya deposit belongs to Corp Mayak Ltd (Figure 4), which began to develop the field in 2013. From 2013 to 2016, only preparatory work was carried out. Geological exploration and associated extraction are now underway.

Presently, the company produces 23% to 24% of the entire Russia production of faceted demantoid. In the opinion of industry experts, Corp Mayak Ltd does not produce less rough demantoid than Gran Ltd, and its share of finished products may reach 40% to 45% of all Russian demantoid output in the near future.

The remaining 1% to 2% of faceted gems is the result of illegal mining operations on both Bobrovka Rivers (Figures 5 and 6). 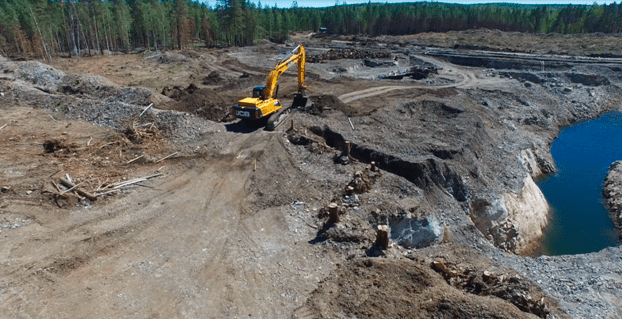 Figure 4. View of the Poldnevaya mine. (Photo: Corp Mayak Ltd) 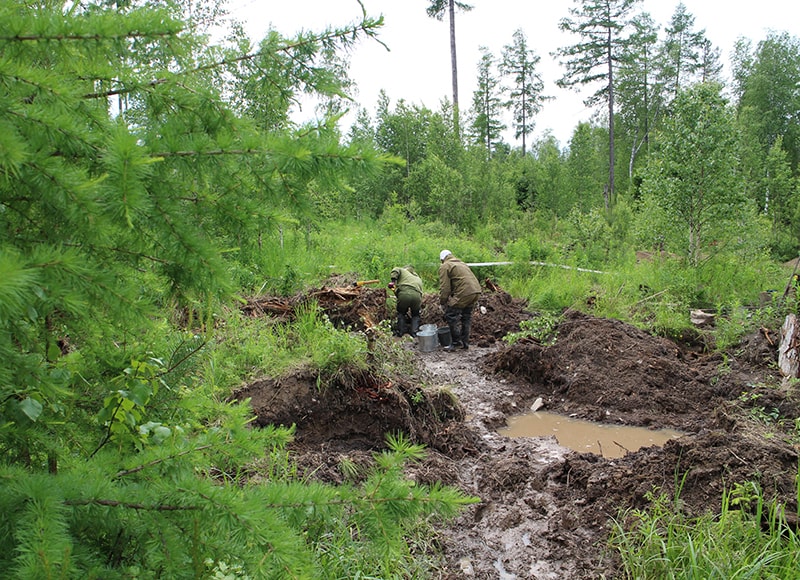 Figure 5. Artisanal mining at the Elizavetinskoye mine. (Photo: A. Burlakov) 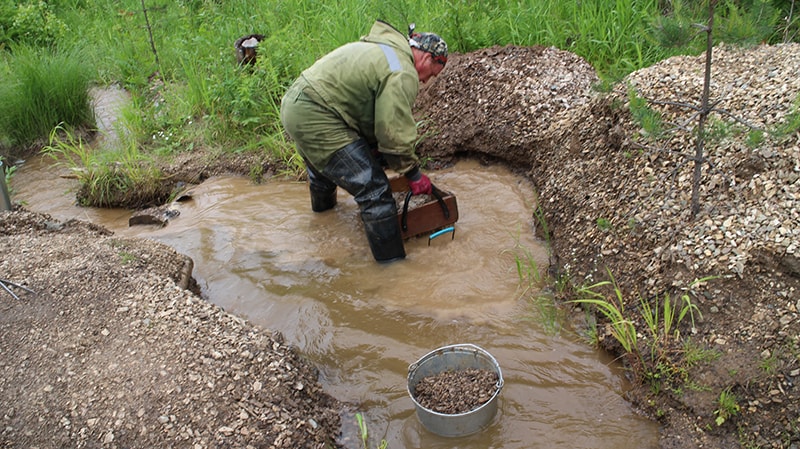 Figure 6. An artisanal miner looks for demantoid at the Elizavetinskoye mine. (Photo: A. Burlakov)

The Korkodin and Poldnevaya deposits (as well as others in the Urals) are confined to the suture zone of the Main Ural Fault and are localized within the hyperbasite massifs.

The two fields are separated only by 7 km. They are situated within a single hyperbasite massif and the zone of one thrust fault. The geological position of the deposits and the complex of rocks in which they are localized are in many respects the same. There are, however, some differences in the localization of productive mineralization.

The Korkodin deposit is confined to the southern part of the Korkodinsky gabbro-peridotite massif, which is irregular in shape and elongated in the meridional direction by 12 km, with a width of up to 5 km. The massif is a serpentinite plate, which is the remnant of the Ufalei serpentinite massif, pushed to the phyllites and quartz-sericite schists of the Central Ural uplift.

The area of the deposit is dominated by serpentinized dunites and magnetite-antigorite serpentinites. To the northeast and southeast, small bodies of granodiorites and plagiogranites are mapped. In the central part of the site, a series of eccentric arranged vein bodies of diallagites can be traced, stretching 30 to 60 degrees. The fall is steep—70 to 80 degrees to the south. The length of the bodies is 10 to 100 m, with a thickness of 0.2 to 1.5 m.

The demantoid mineralization is confined to the field of distribution of diallagites and is controlled by crushing zones that are oriented at right angles to the diallagites. The zones consist of a system of vertical mineralized cracks with a thickness of 1 to 20 mm. Demantoid crystallizes on the walls of the cracks in the form of single individuals or intergrowths, or is part of a fracture in paragenesis with antigorite, tremolite, diopside, scaly serpentine, magnetite, chrome spinel and other fracture minerals [8,10]. Sometimes, the size of mineralized veins increases to 5 to 15 cm (Figure 7). 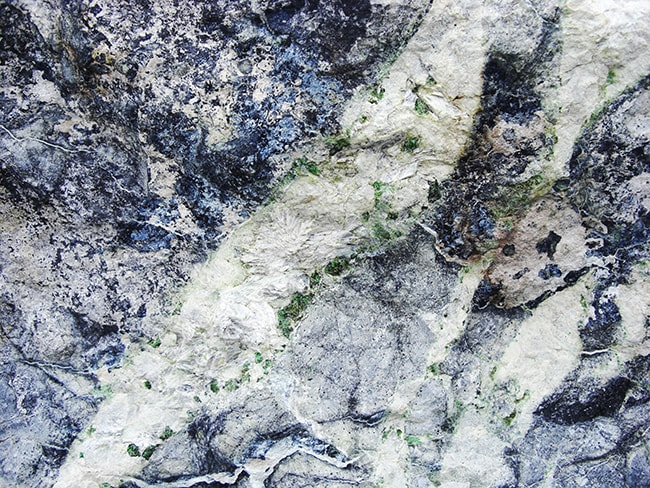 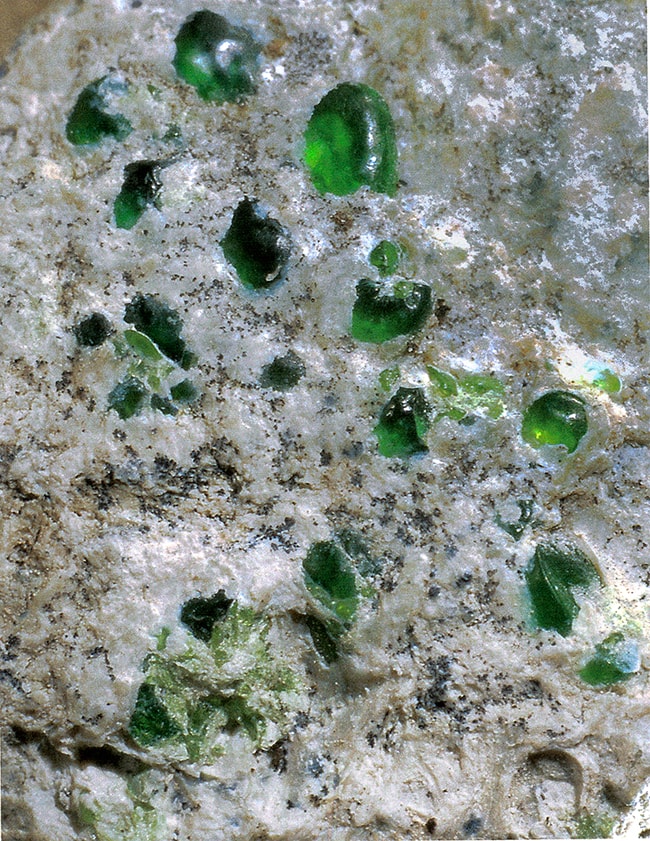 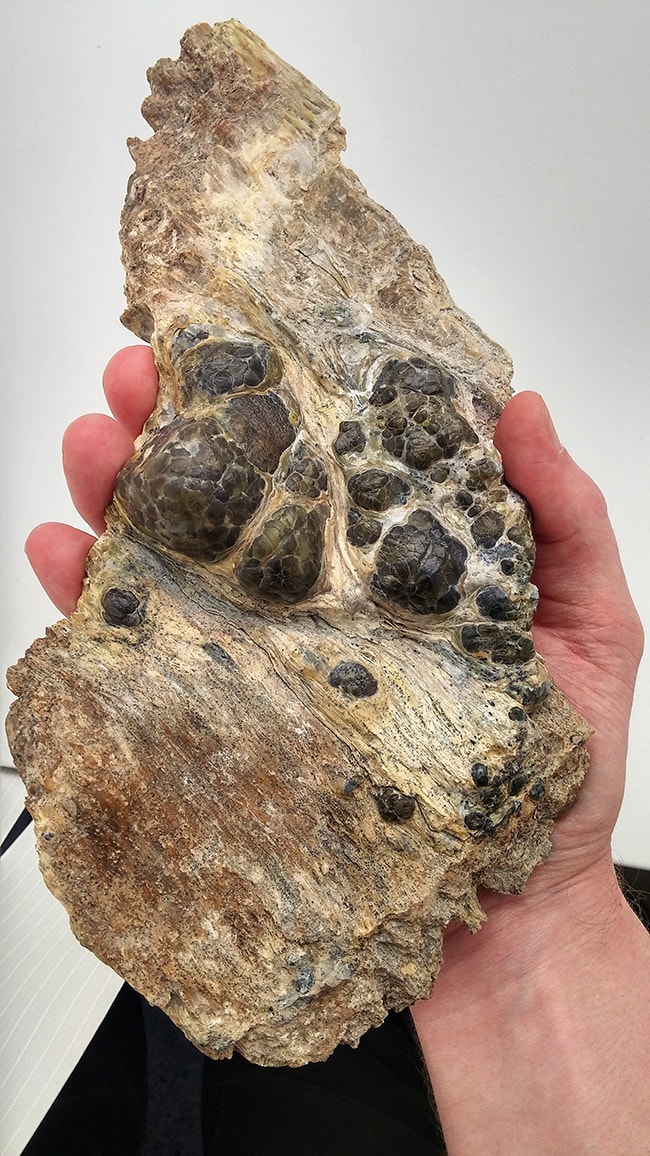 The color of demantoid varies widely, from greenish-yellow, brownish-green to bright dark green. Often, color changes are observed within a single grain, with the central part usually showing more green than the edges. Sometimes, the color zoning has sharp color transitions (Figure 10). 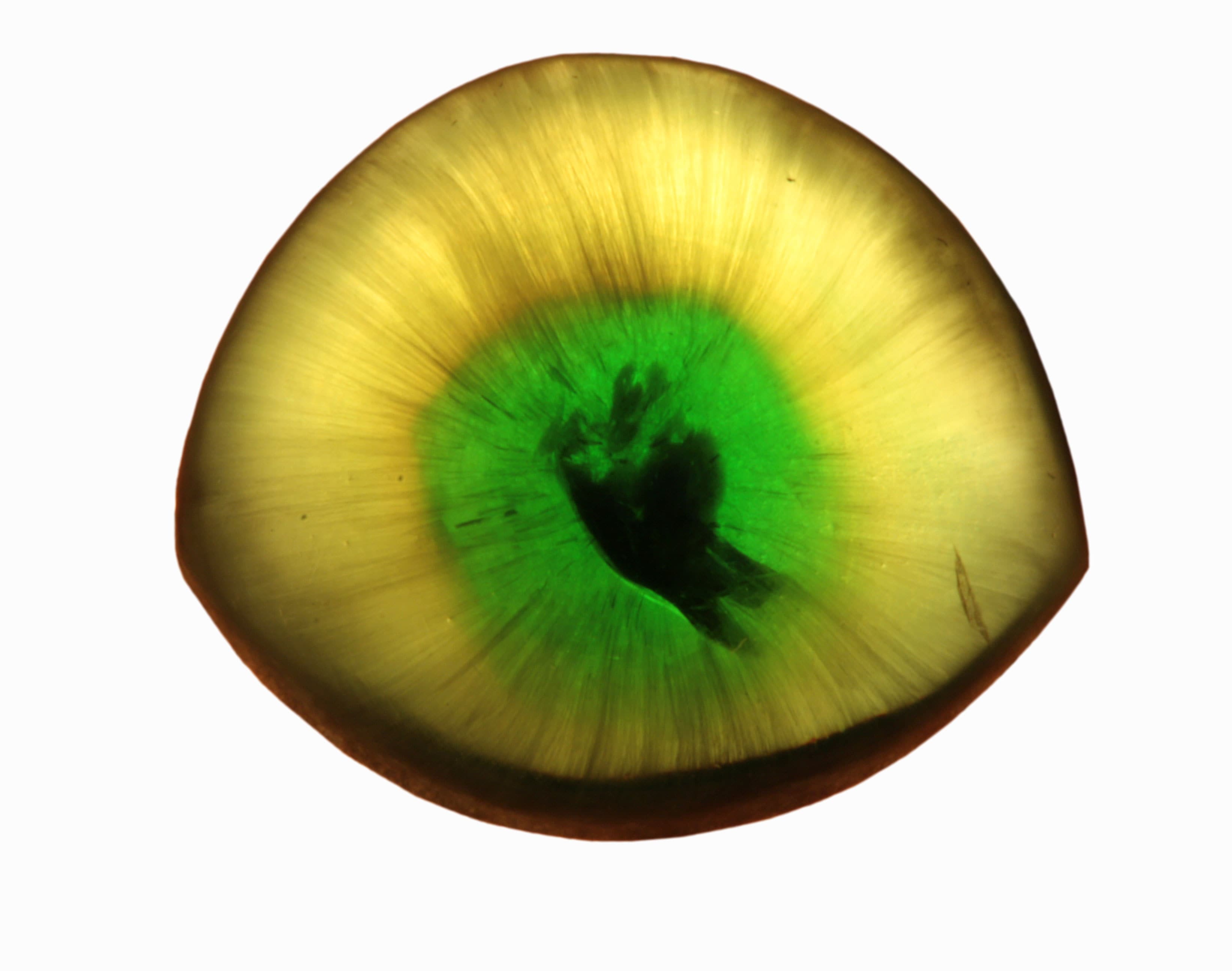 The host rocks of the Poldnevaya deposit are serpentinized dunites and antigorite serpentinites. The main productive mineralization of the site is concentrated within long steeply falling veins of the chrysotile-antigorite-carbonate composition (Figure 11). 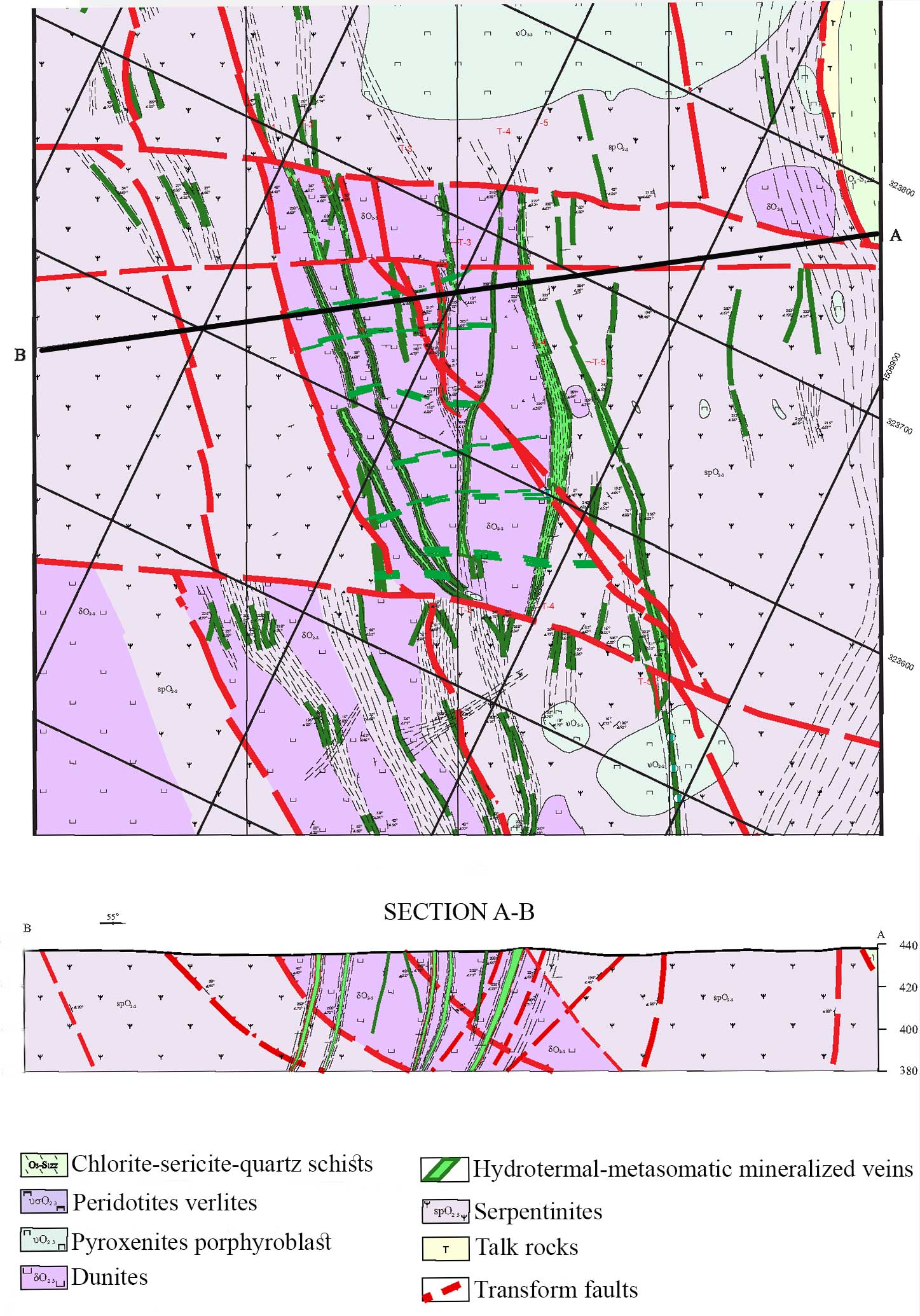 Along the zone, the veins are traced reliably from 45 to 86 m, along the fall of 6 to 12 m. The thickness of the veins is 0.7 to 1.1 m, up to 1.5 m. In genesis, these are typical veins of the alpine type. They are made of a fine-grained aggregate of antigorite, picrolite, clinochrysotil and calcite. Within the veins are extremely rare and unevenly localized mineralized pockets with demantoid. Microprobe studies of differently colored demantoids made it possible to establish variations in the material composition of the gem from its coloration. The change in the color is due to the ratio of the content of chromium oxide and total iron oxide.

Demantoid is an andradite garnet of green to yellowish-green color, according to the standards of GemSet, tone 2-6 [6]. According to A. Kisin [6], demantoids from the lower Tagil Bobrovka River have a color that ranges from a strongly yellowish-green (styG) to a slightly yellowish green (slyG), tone 2-4. Demantoids from the Poldnevaya deposit occur in all possible colors. Demantoid from the Korkodin area are characterized by dark tones (tone 5-8). According to this study, some of the material from the Korkodin area requires heat treatment to remove secondary tones. This low temperature heat treatment results in a constant and stable color.

constant and stable color. There is a somewhat different situation with the demantoid from both the Poldnevaya and Elizavetinskoye deposits as most of it does not need any treatment. Moreover, all the heating experiments did not give visible results, which makes this operation useless.

Despite the long history of studying demantoid, questions still remain about the nature of the horsetail-type inclusions that are found in the gem from the Urals (Figures 12 and 13). 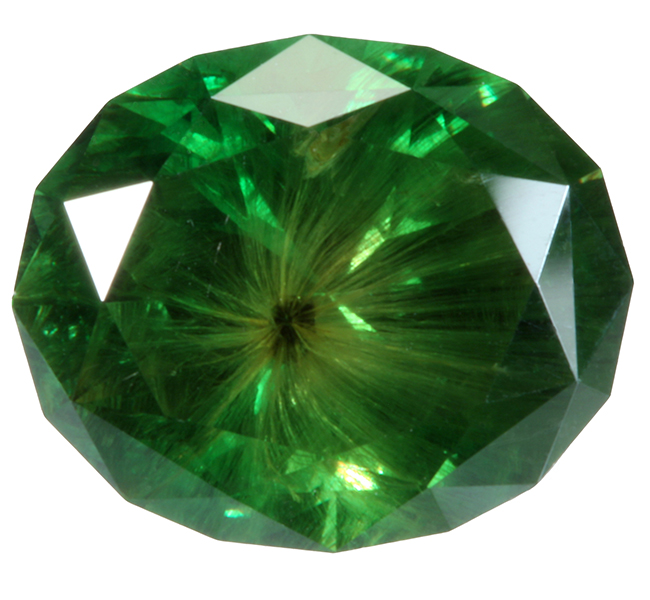 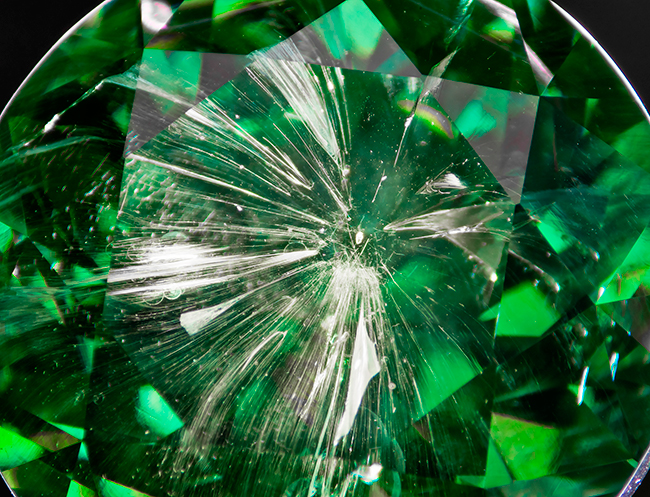 A third point of view, presented by A. Kisin, appeared in the 1990s [5] and was supported by new interesting data in 2015 [7]. According to him, inclusions of the “horsetail” type are tubular hollow formations, sometimes containing inclusions of chrysotile or bissolite, or filled with clay minerals of nesting limonite, serpentine, etc. The appearance of such “pseudo- inclusions” is explained by the specifics of the split growth of the sub-units of the demantoid grains and the propagation of growth defects.

In our opinion, the question of the nature of these inclusions is still open. Very likely, all three types of inclusions take place. In a number of cases, when the inclusions in the demantoid are sufficiently large, it is easy to diagnose them with X-ray structural methods as inclusions of actinolite-tremolite composition (Figure 14). 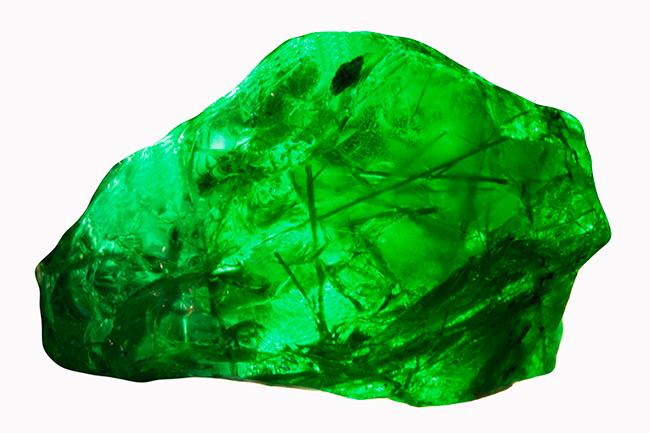 At the same time, some data confirm the presence of inclusions of chrysotile asbestos. And, of course, Kisin’s new data [7] should also be taken into account. In many ways, the same can be said about the nature of the color of the demantoid. The initial conclusions about the dependence of the intensity of the green color on the content of trivalent chromium [1] are recognized by most researchers.

More detailed studies indicate, however, a much more complex relationship [4,10]. The specific color of the demantoid is a consequence of the relationship of two and trivalent iron and trivalent chromium. Even in the presence of a high content of chromium, the green color is “quenched” by two and trivalent iron in a certain proportion. Only with a certain ratio of all three components is the purest green color achieved, and this ratio is still not fully understood.